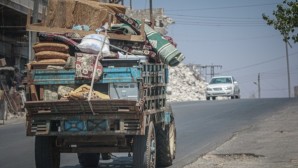 Assad regime and the Russian state, Idlib air attacks continue to increase. Civilians living in Idlib resort to every means to protect themselves from air strikes.

124 thousand civilians fled the city of Idlib from Turkey border

Civil Society Organizations; Syria Intervention Coordinator Director Muhammad HALLAC, as understood from the statement made, Bashar al-Assad regime and supporters of the Russian air attacks as a result of the city of Idlib in the south of the town of Han-Sheikh Sheikh 124 thousand civilian citizens began to flee their homes.

In the continuation of the statement Muhammad Hallac; “The vast majority of civilians, consisting of 19 thousand 231 families in the Syrian territory opposite the Reyhanli district of Hatay, Atme, Kah, Deyr Hassan and Kefer Lusin migrated to camp sites,” he said.

Muhammed HALLAC, who continued his statements; “Some of the civilians then headed for the Euphrates Shield and the Operation of the Olive Branch.” used the phrase. He said that air attacks continued during the feast.

The most immigrant district in Idlib is Han-Seyhun District

Mohammed HALLAC added that a total of 124 thousand people (approximate figure) had to emigrate; “For the displaced, public housing centers, schools, mosques and camps should be opened.” said. If the attacks increase Muhammed HALLAC continues; “If the attacks spread to Serakib and Maarratinnuman districts, the number of immigrants reaches 1 million,” he said.

US and its collaborator YPG / PKK train terrorists
ZİYARETÇİ YORUMLARI