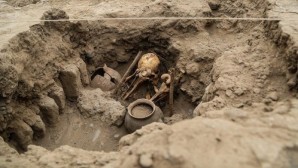 According to the BBC reports, archaeologists discovered the mass graves around the coastal town of Huanchaco, located in the north of Peru’s capital, Lima. The average age of the graves was estimated to be between 5 and 14, while a total of 227 graves were found.

According to experts; “sacrificed to end disasters”

According to archaeologists who continue their excavations, they can reach more mass graves in the surrounding areas. 500 years ago, during a ritual, children were thought to have been sacrificed for the gods to end in disasters.