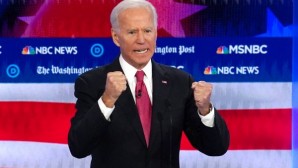 A recent poll by CNN has revealed the final table among Democratic candidates for next year’s presidential election in the United States.

Joe Biden, who served as vice president under Barack Obama, leads the race in first place with 28 percent of the vote.

SANDERS AND WARREN ARE ALSO IN PURSUIT

Meanwhile, Buttigieg, the mayor of South Beth, India, has reached double digits for the first time in polls to date, raising his vote to 11 percent.

In addition, the poll showed that the other Democratic candidates had less than 4 percent of the vote.

18 candidates from the Democratic Party are vying for the presidential election in the United States on November 3, 2020.