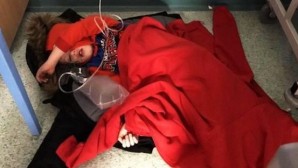 Jack Williment, 4, was taken to a hospital in Leeds, England, on suspicion of pneumonia, the Mirror newspaper reported.

However, because there were no empty beds in the hospital, the child had to lie on the concrete floor for 4 hours with an oxygen mask attached. In the photo published in the newspaper, The Boy’s mother, Sarah Williment, was seen laying coats on top and under her son. After lying on the floor for 4 hours, the child was left on a stretcher for 5 hours and then taken to a bed that was vacated.

Following the publication of the news, Prime Minister Boris Johnson was asked about the issue. Looking at the photo as a result of the insistence of an ITV reporter, Johnson said: “This is an appalling photograph and I am obviously sorry to the family and those who have had terrible experiences in the National Health Service (NHS).” quoth. Johnson also said investment needed to be made to solve the problem.

ONE IN EVERY 20 EMERGENCY PATIENTS WAITS 12 HOURS IN BED

One in every 20 emergency patients in the country has to wait 12 hours for a bed, while only 68 per cent of patients can be examined within the first 4 hours, according to statistics released last week by the UK’s Royal Society of Emergency Medicine.

The state of Health Services, which has been cited as the second most important issue after Brexit, is one of the key agenda items for the election on December 12.