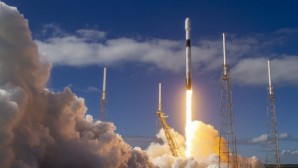 SpaceX’s Dragon cargo shuttle was successfully launched last Friday from Cape Canaveral Space Base in the state of Florida on the company’s own-production Falcon 9 rocket.

The cargo shuttle SpaceX sent to the International Space Station (UUI), containing super mice with twice the casing of normal mice, has reached the space station.

Astronaut Luca Parmitano, aboard the International Space Station, announced that they had reached the Dragon cargo shuttle 3 days after its launch from Cape Canaveral Space Base in the state of Florida.

Parmitano stated that the cargo shuttle was taken to the station by means of a long “robot arm”: “when we get a new vehicle to the station, we also get a piece of the spirit of everyone who contributed to this project. Welcome.”

About 3 tons of cargo, space environment for muscle experiments to be done in the normal mice with twice the case “Super mice”, astronauts ‘ emotions sensitive Cimon called artificial intelligence robot, barley grains to ferment beer, agricultural research to be used for 120 thousand pest-killing roundworms and novelties for astronauts are available.