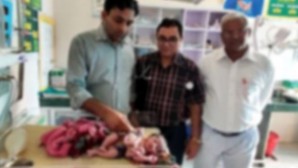 According to the British Daily Mail newspaper, 24-year-old woman, a man and a girl in Rajastan province of India gave birth to twins. There is no problem in the health status of the baby boy stated in the news, the girl’s 4 legs and 3 arms were recorded.

Doctors expecting the mother to give birth to triplets, but not fully developed limbs of the third baby’s body merged with the girl said. It was learned that the woman did not have an ultrasound taken during her pregnancy, so no one was aware that the babies would be troubled.

Excess limbs will be removed by surgery

Doctors who think that the extra limb of the baby girl can be taken and returned to normal life plans to transfer the child to a more modern hospital in Jaipur, the state capital.