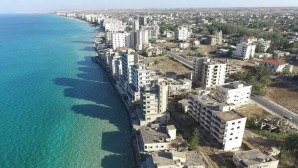 closed maraş, the second cyprus peacekeeping on 13 august 1974, after the Turkish administration was transferred to here and here since then was kept closed to civilians. military zone closed marash was recently opened for the visit of members of the press.

Intensive interest from foreign investors to the region

The unilaterally the government of the Turkish Republic of Northern Cyprus started to work on the opening of Closed Maraş, which attracted the attention of foreign investors to this region. Russian and Chinese investors, before 1974, followed by the citizens of Maras, located in closed Maras and persuaded to sell their property to them said.

Topic to be Moved to the United Nations

According to the Greek Cypriots, the so-called Closed Marash Mayor Simos Yoannu said that the European Union would raise the issue of Closed Marash, saying, “We will go to Brussels and make some meetings.” used the phrase.

Do not sell your property warning

“Our citizens of Marash origin should be careful. They should not sell their goods to foreign companies and capitals.” The struggle in Marash is also important for the Cyprus issue, “he said.