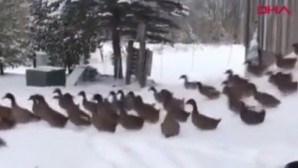 Amelia Horn, who owns a duck coop in Hartford, Connecticut, USA, released the herd outside the coop to weather and navigate after the first snowfall of the year.

WHEN THEY FELT THE COLD, THEY RAN IN.

The herd of ducks took quick steps outside and briefly stood in front of the coop’s door. The herd walked and waited in the snow for a while. Feeling the cold, the Ducks then rushed in to the coop.

THOSE MOMENTS WERE RECORDED SECONDS BY SECONDS

Those moments were recorded by Horn in seconds. The images, shared on social media, were watched by nearly 10 million people, received 100 thousand likes and were shared 350 thousand times.