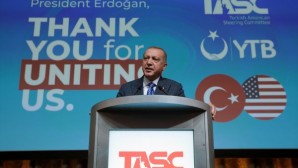 Erdogan, who was in the United States to attend the 74th General Assembly meetings of the United Nations, met with the Turkish, Turkish, Muslim and Muslim communities in the event organized by the Turkish-American National Steering Committee at the Hilton Midtown Hotel.

Erdogan, his speech here “Allah’s greetings, mercy and blessings be upon you,” he began.

“WE SHOULD BROWSE OUR BROTHERHOOD LAW”

“We are part of the 1.7 billion Islamic Ummah. The differences between us never prevent our brotherhood and conversation. Even though we are thousands of kilometers away, our hearts are the same.”

“As long as we observe our brotherhood law, as long as we keep the conversation between us alive, be sure, no problem is not solved. For this reason, American Muslims, regardless of their origin, whatever country, must meet in the same common denominator.”

“WE HAVE NO PROBLEMS WITH OTHER RELIGIOUS MEMBERS”

“We, as Muslims, do not have a problem of living together in peace with other members of religion, nor have they ever been.”

“THE SPILLED MUSLIM HAS SHARES IN THE BLOOD”

“For the sake of protecting their interests, we know very well that every Muslim who spills arms of terror organizations has a share in every Muslim blood spilled.”

“WE HAVE TAKEN THE NECESSARY STEPS FOR THE FATHER LEADER”

“THE CASE OF JERUSALEM IS THE NAMUS OF THE 1.7 BILLION ISLAMIC WORLD”

“The Jerusalem case is not only a handful of Muslims in Palestine, but the honor, honor, harim-i ismet of the Islamic world, whose number is 1.7 billion.”

“No power, no threat can prevent us from protecting the law of Palestine, our first qiblah, Jerusalem-u Sharif.”

“We will continue to seek the rights of journalist Cemal Kaşıkçı and Egyptian President Mohammed Morsi, even if someone does not want to.”