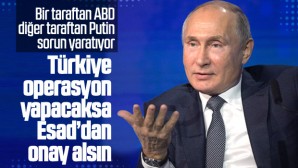 Russian Foreign Ministry spokesman Zaharova Mariya, the Republic of Turkey to the east of the Euphrates were found to be made in explanation of the military operations.

Mariya Zaharova, spokesman of the Russian Foreign Ministry; “The fight against terrorism should be the consent of Damascus for their activities. Because here comes a sovereign country, this is the first and absolute condition. This is in no way change principled stance of Russia, also applies to the action, organized by Turkey.” said.

Mariya Zaharova, spokesman of the Russian Foreign Ministry; “we are in communication”

Mariya Zaharova, spokesman of the Russian Foreign Ministry; “There is no doubt that we are in contact with our Turkish partners. There are questions that have already been resolved and yet there are no solutions, but that does not eliminate the fact that as a sovereign country Syria must control its territory and have the right to make decisions about what is happening on its territory.” used the phrase.