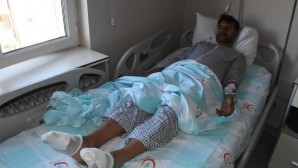 they take on a camp of the Greek police married explaining that for days and tortured and 4 children Pakistani Ali Riza, “I came to nearly 5 months ago Turkey. I worked in a workshop finally grinder in Istanbul. Raised some money to Greece to go to Germany Here, the Greek police caught us, then took me and my friend Ali Murtaza’yı camp. It was a very bad place. We stayed here for 3-4 days. I was lying. then they took us at a boat bindirip Turkey. greeted us Turkish soldiers and decided to eat. he brought us very well behaved in Turkey. I thought I was gonna die, I’m lucky I survived. I’ll be back to my parents one year working in Pakistan in Turkey . ” said.

Ali Murtaza who was discharged after the treatment was delivered to Edirne Provincial Migration Administration.