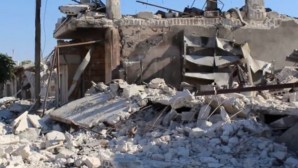 Syrian Assad regime continues to increase air attacks in and around Idlib with the support of Russia. Beslaka, mrat harma and the airstrikes on the villages of Ihsem balance sheet was terrible. 4 people were killed and 5 people were injured in attacks, many houses became unusable. dead and wounded women and children were reported.

civilian defense authorities from the scene by removing the bodies under the debris had identified the identity, the wounded reportedly sent to the surrounding hospitals. Russian warplanes organized air strikes on the town of wire manas connected to idlibe yesterday, 5 people were killed and 3 people were wounded with these attacks.