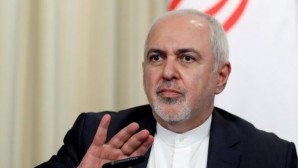 Speaking on American CBS television, Iranian Foreign Minister Mohammed Cevad Zarif said that Iran was not behind the attacks on Saudi Aramco’s oil facilities, Saudi Arabia, and that any team conducting an impartial investigation would reach the same conclusion.

“The UN should start an investigation with an independent delegation”

Iran, Saudi Arabia is not informed by the United Nations that sent a team to investigate Zarif, if the UN conducts an independent investigation, argued that Iran will not be responsible for the attacks.

“They’re hiding the truth from Trump.”

US President Donald Trump’a ” told the lies that will lead to war ” and the United States needs responsible national security authorities to separate the truth lies and Zarif, said:

“We want a constant deal”

‘We are ready to talk, but we need to negotiate a permanent agreement, not just for an agreement that will be valid for the next one, a half or five, five and a half years. We’ve talked before, remember, we didn’t sign a two-page document, so let’s do the same, tough talks. ”

Asked whether the war between the United States and Iran can be avoided, Zarif said, “I’m not sure if we can avoid the war, but we won’t be the one who started the war, and he won’t be the first one to finish it.”