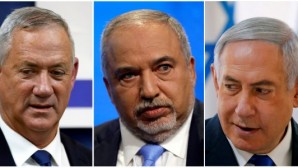 “The most important thing for us is to take Binyamin Netanyahu from the prime ministry. Therefore, we propose that the next coalition government’s prime minister be Gantz,” Eymen Avde, leader of the Joint Arab List Bloc, told President Rivlin. used the phrase. On the other hand, before the Joint Arab List delegation Rivlin, Gantz’s party Blue-White and Prime Minister Binyamin Netanyahu’s party Likud’s delegation received.

As expected, Blue-White proposed Gantz, and Likud proposed Netanyahu as prime minister of the next coalition government. Before the meeting, it was claimed in the Israeli press that Likud would not propose Netanyahu as a candidate because of his tactics, but this claim was wasted after Rivlin’s meeting with the Likud delegation.

Liberman did not submit a suggestion

Avigdor Liberman, former Defense Minister and leader of the Israeli Home Party, announced that they would not offer President Rivlin a name for the prime minister’s office. Speaking before the Israeli House delegation meeting with Rivlin, Liberman made statements targeting the Common Arab List.

Liberman said the Blue-White leader would not offer his name to President Rivlin because the Joint Arab List supports Gantz. used the phrase.

No Party Can Establish Government Alone

According to the unofficial results of the early elections in Israel on September 17, no party has reached the 61 deputies required to come to power alone in the 120-seat Assembly. Netanyahu’s leader Likud’un led by the right-wing parties 55, Mavi-Beyaz and 44 deputies in the left-wing support it has issued. The Common Arab List Bloc, representing Israeli Palestinians, succeeded to be third in the elections and sent 13 MPs to Parliament. Our house Israel, Liberman’s party, came in fourth and won eight seats.

Amazon, which lost bidding in the US, blames Trump
ZİYARETÇİ YORUMLARI