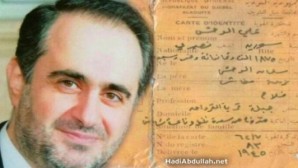 The son of Syrian President Bashar al-Assad’s uncle Firas al-Assad is known for his opposition to the atrocities committed by the Assad regime. Firas ESAD shared on social media like a confession.

Bashar ESAD’s cousin Firas ESAD stated that there is a possibility that the photo will be removed or banned, while sharing the photo, “Everyone can share it and save it quickly. has warned.