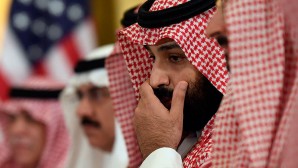 Remarks by Prince Bin Selman to journalist Martin Smith, producer of the American PBS television program “Frontline”, about the murder of Kaşıkçı during an electric car race in Riyadh in December 2018, featured in the trailer of the program to be released on October 1 took.
In the introduction trailer, it was stated that Bin Selman first answered the questions about Kaşıkçı’s murder in an interview and the parts of the Crown Prince’s dialogue with journalist Smith were displayed on the screen without using Bin Selman’s image and voice.

“How could that happen without your knowledge?” The question of bin Selman, “20 million people live in Saudi Arabia. There are 3 million government employees.” he says.

Smith said to Bin Selman, “Can they take one of your planes?” “There are officials and ministers who follow my work. This is their responsibility. They have the authority to do it.” that the answer.

Saudi journalist Kaşıkçı was killed at the Consulate General of Saudi Arabia in Istanbul on 2 October 2018, where he went for marriage.
In a 101-page report released in June by the UN High Commissioner for Human Rights (OHCHR), Saudi Arabia was blamed for the deliberate and intentional killing of Cemal Kaşıkçı.
The report pointed to reliable evidence for the investigation of senior officials, including Saudi Arabia’s Crown Prince Mohammed bin Salman.
The report also invited UN Secretary-General Antonio Guterres to initiate a complementary criminal investigation into the killing of Kaşıkçı, emphasizing that the sanctions for the killing of Kaşıkçı should include the Crown Prince and his personal assets abroad.

LIVES IN THE LAST 24 HOURS