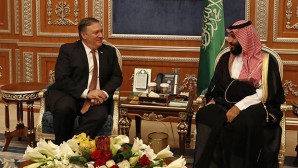 Heather Nauert, US State Department spokesman, made a written statement regarding the meeting.

In other news, Minister Pompeo welcomed Saudi Arabia’s support for the review by Turkish officials, “the Minister and the Crown Prince agreed on the importance of a comprehensive, transparent and timely investigation that clarified the issue.” was evaluated.

The statement also discussed regional and bilateral relations in the meeting.

Trump said yesterday that he would send Foreign Minister Pompeo to Saudi Arabia urgently to meet with King Salman on the fate of Kaşıkçı.
Pompeo went to Riyadh today and started his talks with King Salman bin Abdulaziz first.

Cemal Kaşıkçı, who contributed to the Al Watan newspaper, an important platform for the Saudi reformists and who also wrote for the Washington Post, was never heard from again after going to Saudi Arabia’s Consulate General in Istanbul on Tuesday (October 2nd).

LIVES IN THE LAST 24 HOURS