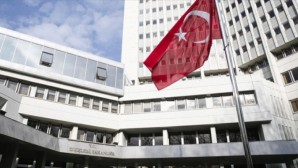 Foreign Ministry spokesman Hami Aksoy, the Greek Cypriot Administration (GASC) in our continental shelf, claiming that they own the license area number 7 with international companies signed a question about the news, has answered a written question.

“Despite all our warnings, the GCASC cannot comprehend our commitment to this issue,” Foreign Minister Spokesman Hami Aksoy said, referring to media reports that he has signed an agreement with French Total and Italian ENI. said.

“Within the continental shelf in the eyes of the United Nations”

“A part of the so-called license area number 7 remains within the continental shelf of our country, which we have previously taken into consideration and shared with the international public, as well as being registered with the United Nations (UN) in the region.” He continued:

“Our country will not allow any foreign country, company or ship to carry out hydrocarbon exploration / extraction activities without permission in our maritime jurisdictions and will continue to take necessary measures in order to protect its rights and interests. We continue to make strong warnings that unilateral actions aimed at extortion do not contribute to peace and stability in the Eastern Mediterranean. “

“The proposal made by the Turkish Cypriot side for the fair sharing of the island’s hydrocarbon resources is still on the table. This signature, unfortunately, insists that the Greek Cypriot side is unresponsible to maintain the irresponsible attitude of the Turkish Cypriot side to disregard the equal, inseparable rights and interests of the natural resources on and around the Island. We are again warning the companies interested in the region that no hydrocarbon exploration can be carried out on the Turkish continental shelf based on the invalid licenses of the GASC. “