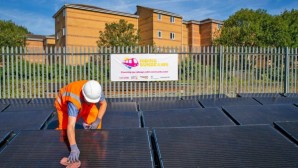 Some trains in the UK are powered by railways, which consist of solar panels. Britain, which made a first in the world, became the first country to use the railway with solar panels. Expeditions began in the region opened to use.

Approximately 100 solar panels were used in the construction of the railroad around the city of Aldershot in Hampshire. A separate task of these panels is to illuminate the runway and to power the signaling, if the efficiency of the selected pilot region is obtained, it will also operate in other regions.

Almost all of the railway stations have solar panels, although there are no solar-powered railways in other regions except the pilot area. In addition, the UK government, which initiated a study, will completely eliminate diesel use by 20410.

More than 250 trains in India generate electricity through solar energy on the roof. Indian Railways; It also plans to build a rail network in 10 years by installing solar panels on rails.

US and its collaborator YPG / PKK train terrorists
ZİYARETÇİ YORUMLARI