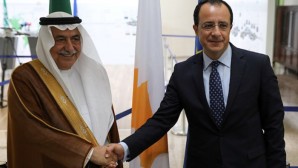 In the recent days, Turkey launched oil and gas exploration in the Eastern Mediterranean with its drill ship surveys. These activities comforted some countries. However, it is strange that the countries that are not coastal to the Mediterranean and are far from the region carry out drilling activities. At the same time Turkey and Cyprus intersection of interests in the US and some EU countries to support the rumor about it. the last addition to these countries was the Saudi Arabia.

“We are with Cyprus”

Saudi Minister Al Assaf, “We stand with our ally South Cyprus’s head in the face of Turkey’s illegal activities in the Mediterranean. We will increase our military cooperation. ” The Saudi Minister also stressed that the alliance network, including Israel, will bring stability and order to the region.

US President Trump: I didn’t threaten anyone.
ZİYARETÇİ YORUMLARI