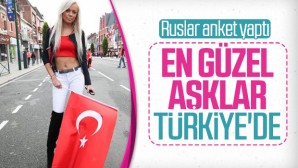 On the Russian-based website that booked flights and hotels, he published a survey of love surveys for Russian tourists. It was said that about a thousand people participated in the survey and research.

first in the survey as ‘Turkey’

according to the results of the survey, according to the results of the statement, the majority of Russian tourists live in their own country resorts love. however, the same research shows that Russian tursitlerin spending time at the same rate as in Turkey worsted. while 25% of women surveyed admit they love living in Turkey. 18% of the men surveyed said Turkey also had love. Russian women and men, according to the proportion of other countries they find partners; Thailand, Cyprus, Italy, Spain and Greece