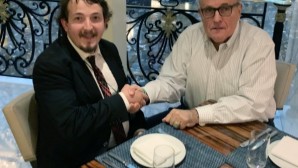 S-400 from Russia, Turkey and the United States take on the future of Turkey’s strained relations with the two countries removal of the F-35 program, the theme will be effective in the United States.

In the evening, US representative Yavuz Atalay spoke with Donald Trump’s lawyer Rudy Giuliani about these strained relations.

“There’s something in common”

Giuliani, directed to him; “Trump said of the Obama administration on the Patriot sales to Turkey not treat her fairly. What do you think?” answered the question; “President Trump, he treats you fairly when you act fairly. This also applies to Russia for China … we have very strong relations with Turkey. Too many years we’ve been together in NATO. President may not like everything that Trump did. But surely President You meet Trump at a common point. “