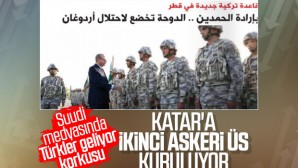 Qatar to set up a second base moves from Turkey

Turkey, relations following the decision to double the number of Turkish military base in Qatar is connected tightly. Since the first base established in 2015, Qatar has also initiated works to include the construction for the second base building move. Opening of the Republic of Turkey planned to make military base in saudi arabia Prime Minister Recep Tayyip Erdogan has followed closely the media.

Türkiy Republic to Saudi Arabia citizens who are disturbed by the presence of media in the region, “Turkey’s invasion of Qatar confidential“, “Doha, Erdogan bowed to the occupation,” he announced with a headline that horse.

From Saudi Arabia to Qatar; “Call to Close Turkish Bases”

There were “closure of Turkish military bases in Qatar” under the conditions of abolishing the embargo decision applied by Saudi Arabia to Qatar. however, the Qatar government refused.