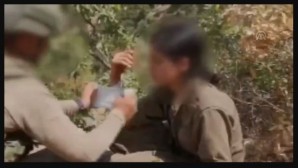 the Turkish armed forces (TAF) continue their operations without any borders. Turkish soldiers helped the terrorists who were wounded in the clashes with terror elements in Hakkari countryside recently. commando search operations carried out in the field after the conflict, the wounded terrorist, extending the helping hand soldiers, wounded the wounded female terrorist.

The first aid was given by the Turkish soldier, who had just fired a bullet, after the security measures were taken by the female terrorist engaged in search and search activities. “calm and do not be afraid,” he was warned the terrorist was given water after the first aid. “The surrenderers were told that the Turkish soldier had behaved badly. I saw that this was not real.” said. then he called the terrorists on the mountain “run as soon as you can.”