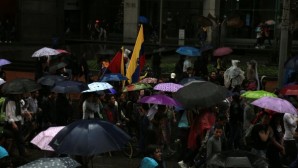 More than 49 million population, South American countries, Colombia, ex-the Revolutionary Armed Forces of Colombia (FARC) claims that fully implemented the peace agreement was not made, and the continuation of the discontent created among the people because of the assassination of community leaders, as well as the government wages and pensions in the face of planned changes related to the protests and declared a general strike in the frame continue.

In addition to the days of marches in many cities, 3 general strikes were announced on 21-27 November and 4 December in Bogota, the country’s capital, this time an itinerant concert event was held.

THE ‘UMBRELLA REVOLUTION’ CAME TO MIND WHEN IT RAINED

The itinerant concert, “Un Canto X Colombia” (A Song for Colombia), started at the Bogotá Planetarium in the city center, was the 7th edition of the concert. He traveled most of the street around the city. At an anti-government concert held by dozens of singers and bands over the truck, the sudden opening of their umbrellas in the face of the rain revealed images similar to the “Umbrella Revolution” protests in Hong Kong.

The protests, which have continued for days in Colombia with different intensities in different regions, began with a general strike announced on November 21. There were tensions and clashes between police and demonstrators in places where 5 people were killed and nearly 1000 people, including police, were injured.

Different groups to the negotiating table with the government in dialogue with unions, privatization, the abandonment of sitting a few days ago, in the last 2 years, with students and locals to stick to the agreement, the implementation of the peace agreement, be taken in the face of assassinations against community leaders and headmen, the Colombian riot police unit accused of violence against demonstrators esmad the abolition of pensions and the withdrawal of the bill in relation to wages and taxes, such as the easing of demands.