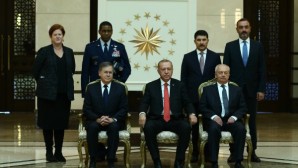 The relationship between the US and developments in Turkey after the agenda is entering a new era. 22 months after the US ambassador again began to work in Turkey. US Ambassador David Satterfield presented a letter of credence to President Recep Tayyip Erdoğan. As is known, with the United States to Ankara after Turkey’s political and economic crisis, there had been a long time between assignments. and the relationship between the two countries went down to the level of charge.

In Spain, the helicopter and the plane collided: 5 dead
ZİYARETÇİ YORUMLARI