US President Donald Trump, about himself “forced Ukraine, Joe Biden to investigate” allegations, “I did not threaten anyone. There is no pressure, no push. There is no. This is a great fabrication.” found in the description. trump, usa, uk tump news, trump last minute, usa news, us last minute, america news, last minute america, world news, world last minute, 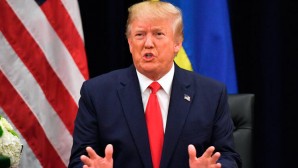 Trump held a press conference in New York after the 74th session of the United Nations (UN) General Assembly.

Stating that he met with many leaders during the General Assembly, Trump made statements that the Democrats would initiate a dismissal investigation against him.

In his telephone conversation with Ukrainian President Vladimir Zelenskiy on July 25, Trump stressed that there was nothing wrong, “I didn’t threaten anybody. There is no pressure, no push. There is no. used.

Trump stressed that Joe Biden and his son’s ties in China and Ukraine should be investigated and that it should be transparent.

Trump, who described his alleged expulsion investigation as a “witch hunt”, said, “The Democrats did this deception during the UN General Assembly process. It was just like the other things. It was planned. Witch hunting continues. found.

Stating that the US is one of the most powerful economies in the world, Trump said, “China has lost trillions of dollars since I took office.” found.

Stating that the situation in Venezuela is bad in many ways, Trump said, “Venezuela is an example of what socialism can do.” found.

During the press conference, Trump argued that journalists were making “false news”.

In other news, Trump met with Zelensky before the press conference.

“The annexation of the Crimea was during the Obama administration. I don’t think it should be like this, but it was a long time ago, and the issue was dealt with very weakly,” Trump said at a news conference before the bilateral meeting. found.

“No, you saw the text of the speech. It was a good phone call. We talked about a lot of things. Nobody forced me to read it,” Zelensky said to a journalist whether he felt pressure on Biden’s investigation during his meeting with Trump on July 25th. she replied.