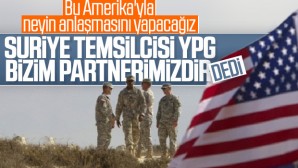 the United States has long made weapons also help by providing money and logistical support to the PKK’s Syrian arm of the YPG, thoroughly approaching the border with Turkey continues to pose a threat. The Republic of Turkey; increased operational activities to ensure border security. The Turkish Armed Forces, on the other hand, was brought ready for operation. TAF President of Turkey, Recep Tayyip Erdoğan while waiting for instructions, while the US appeared to have tried every way to win time of terrorist organizations. Syrian border with Turkey to secure the area to be created in the US gives you the confidence to sit at the table of a terrorist organization.

US Syrian Representative Jeffrey; “PKK and YPG have the same roots”

James Jeffrey, Special Representative for Syria in the United States; “We contradicts with Turkey regarding our role in northern Syria. We’re partners with YPG, they in essence PKK subsidiary. A group that has its roots with the PKK.” said

US Syrian Representative Jeffrey; “We do not see YPG as a terrorist organization”

James Jeffrey, Syrian Special Representative in the United States, continued his words; “A group recognized by Ankara as the theorist organization. But we do not see the people in Syria as terrorist groups.” said

James Jeffrey, Syrian Special Representative to the United States, who says that they are not on the United Nations Terrorist Organization list; “What we nor the UN’s list are. They want that we should not partner with them. Many times they threatened to go after them. They want to go to advance the military. We are working on something we call the secure zone name. Will withdraw from the border with Turkey.” finished his words.