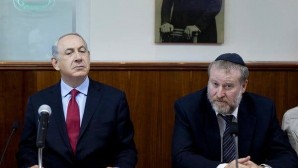 Israeli Prime Minister Benjamin Netanyahu has spoken many times recently about the annexation of the Jordan Valley in the West Bank to Israel and said it was time for the region to come under Israeli sovereignty.

Israel’s Chief Prosecutor, Avihay Mandelblit, told Prime Minister Benjamin Netanyahu that any move to annex the Jordan Valley or any part of the West Bank could lead to an international criminal investigation, including the Israeli military and political leaders responsible for the West Bank, Haaretz reported on the website.

THE INTERNATIONAL CRIMINAL COURT IS FOLLOWING THE REGION CLOSELY

The report also said that International Criminal Court (ICC) Chief Prosecutor Fatou Bensouda is closely following the events in the region and will take into account the consequences of this step.

The ICC Prosecutor’s Office’s report for 2019, published on 5 December, describing preliminary investigations of 9 countries, noted that the ‘alarming’ proposals submitted to Parliament regarding the Jordan Valley in the West Bank were closely followed during the recent election process in Israel.